this idea resulted from a coming together of the channels:
#p1-remote-kurs-brettspiel and #p10-outdoor-exhibition-for-one
and from test-playing the game: #p9-tibahni-adventure

in our group call on saturday morning we shared ideas for the locations and formats that an outdoor exhibition, but also for how to involve an audience in both creating and consuming the art.

my own interest in this format sprang from a recent attempt to turn a materials workshop into an online course and instead making it into a board-game that players can play at home alone with the materials. the outcome of the adventure is a snapshot of a scene with a written message, and i had been thinking about how these could then be shared with a public audience.

THE IDEA
to use your food leftovers to transport your ideas beyond the compost bin!
the parts of plants that we do not eat are able to provide us with other forms of nutrition. we can use them as building materials to express ourselves! made from biodegradeable materials, these expressions can be placed outdoors, in nature, where the expressions can fertalize both plants and humans with nutritious substance. 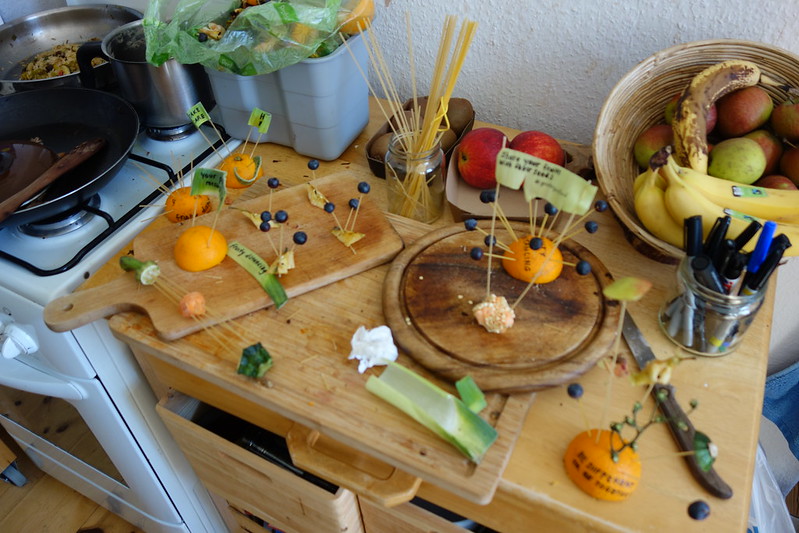 without thinking too much, i built some assemblies of different fruit and vegtable leftovers that were in my kitchen compost.

with a permanent marker, i wrote short messages on these assemblies. drawing from concepts of my own past and current work that seemed conducive for this fruity / fertile messaging system.

SHARE YOUR FRUITS WITH THEIR SEEDS
(pro open source, knowledge should be free as in speech! and beer)

HUMANS ARE FORGETFUL MATERIALS
(humans are not separate from nature)

BE DIFFERENT OR BE TOGETHER
(think about it: humans don’t exist by themselves) 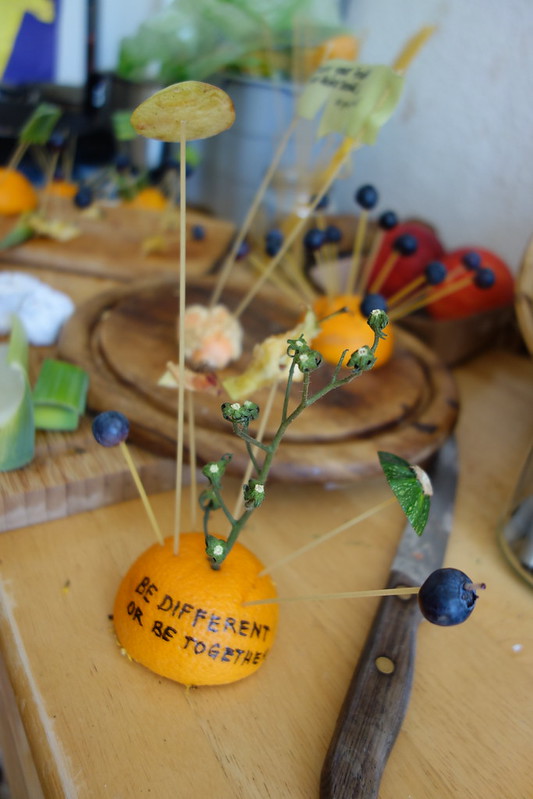 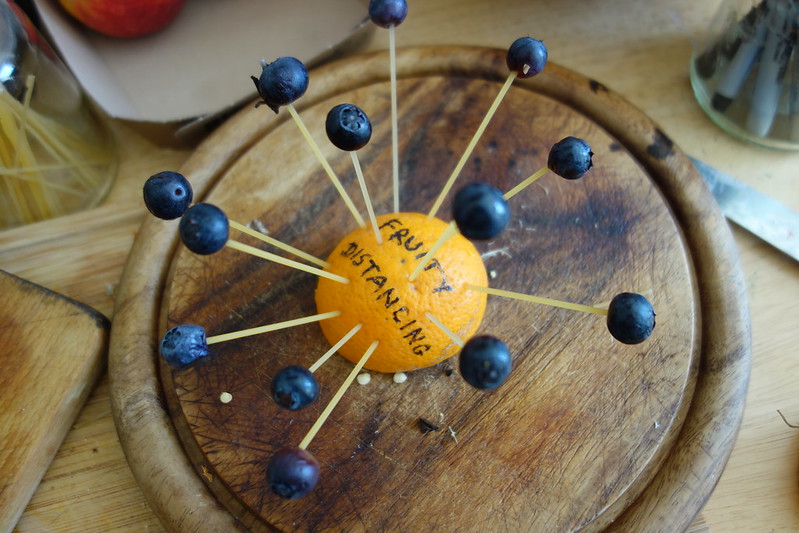 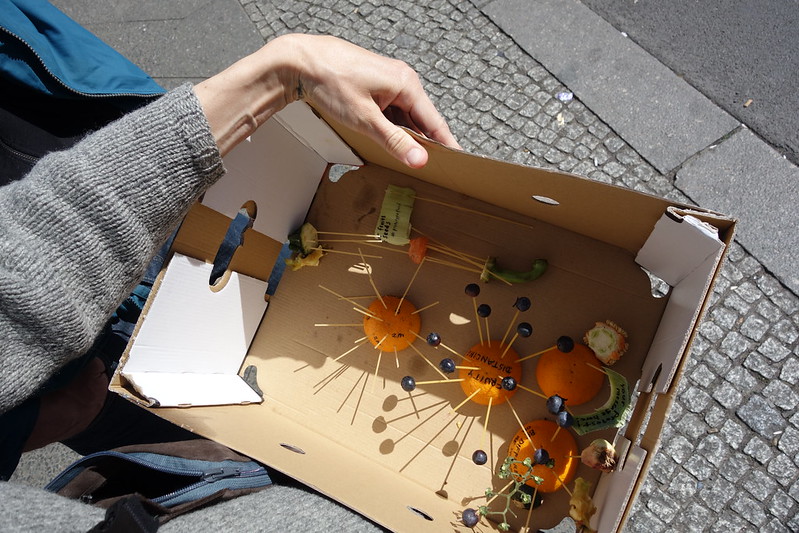 FIRST TEST :: SITUATING MESSAGES
packed the mini assembly sculptures into a box and walked out into Friedrichshain / Berlin.
i felt comfortable placing / arranging / depositing the messages out on the street, even when people were watching. maybe because it was a quick thing to do, there were not many people around and also the thing i was placing was so “harmless”…. just some apple cores with blueberries…. or orange rind with spaghetti spikes…… 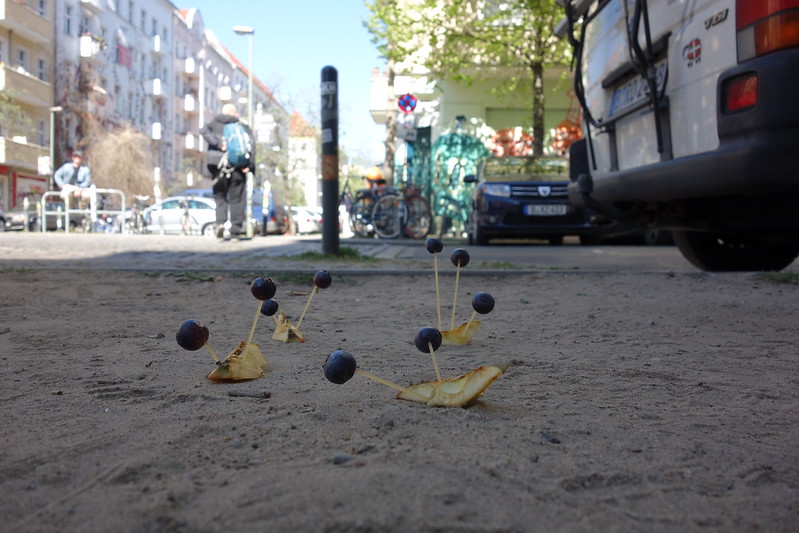 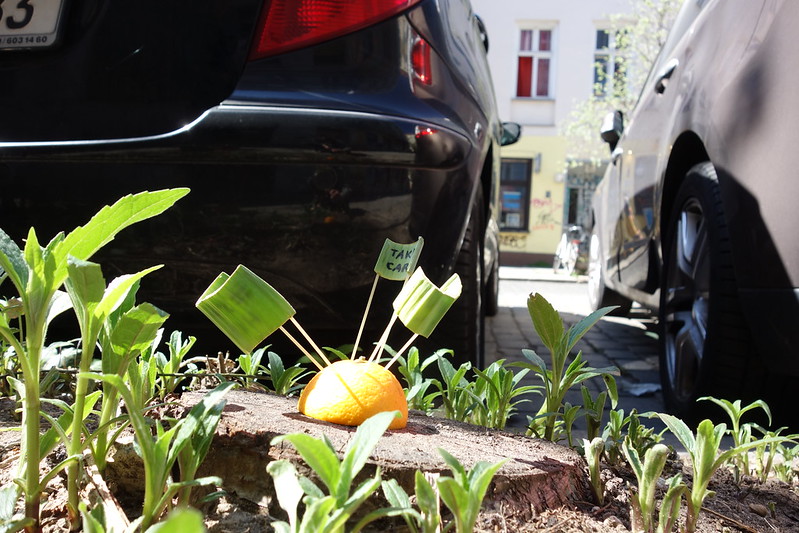 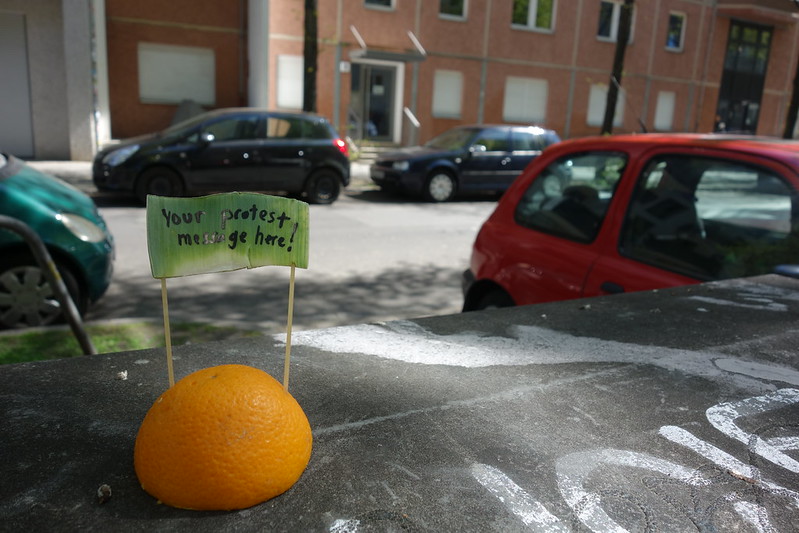 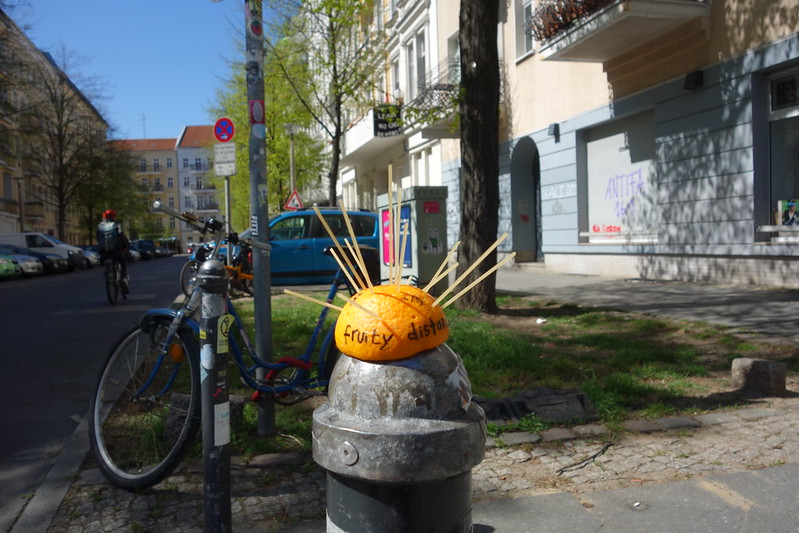 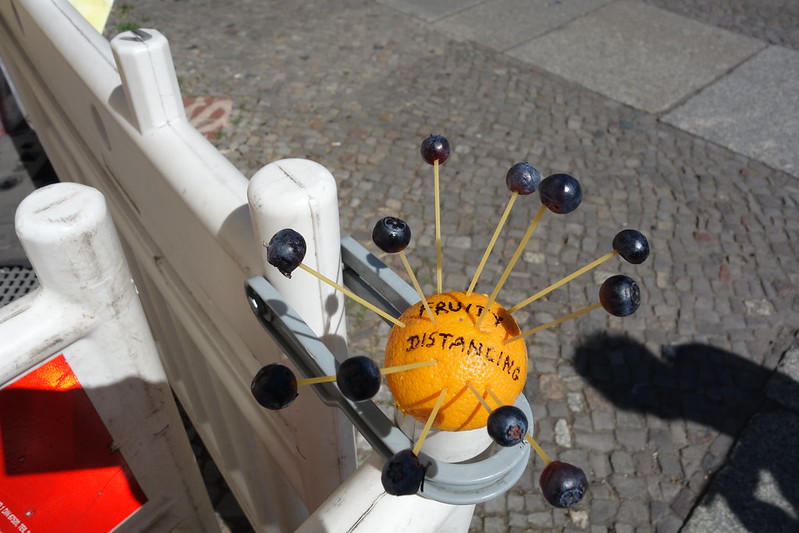 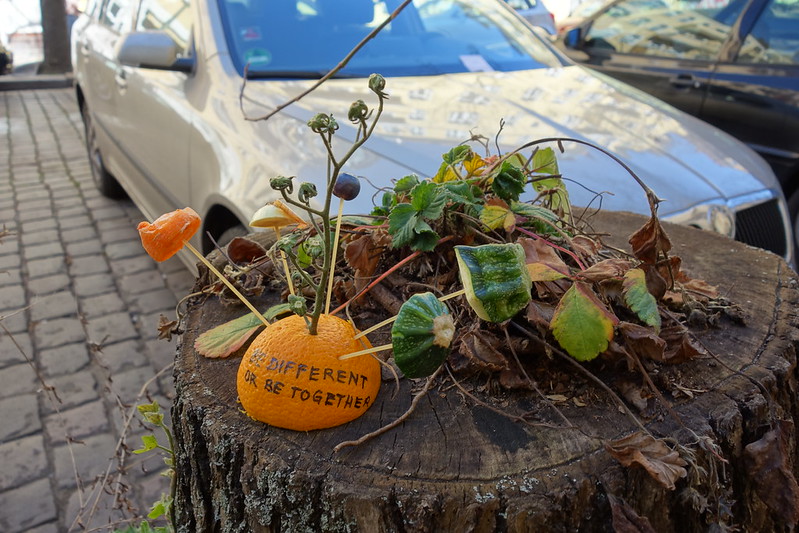 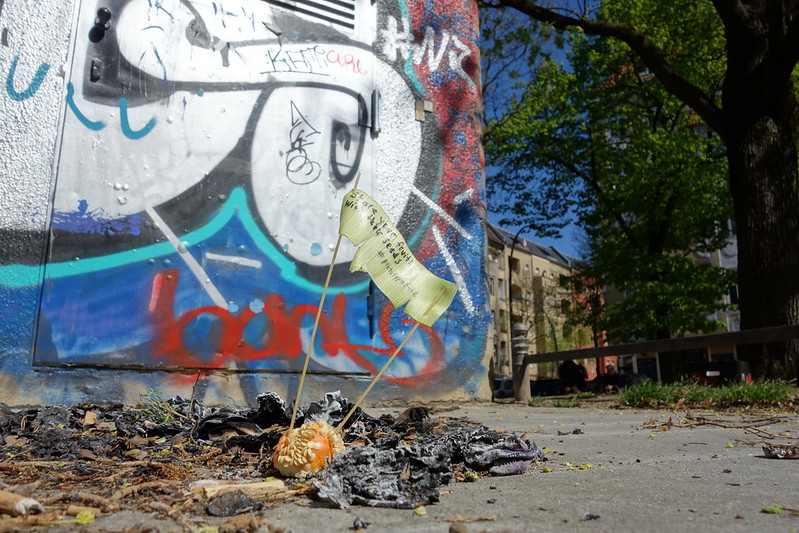 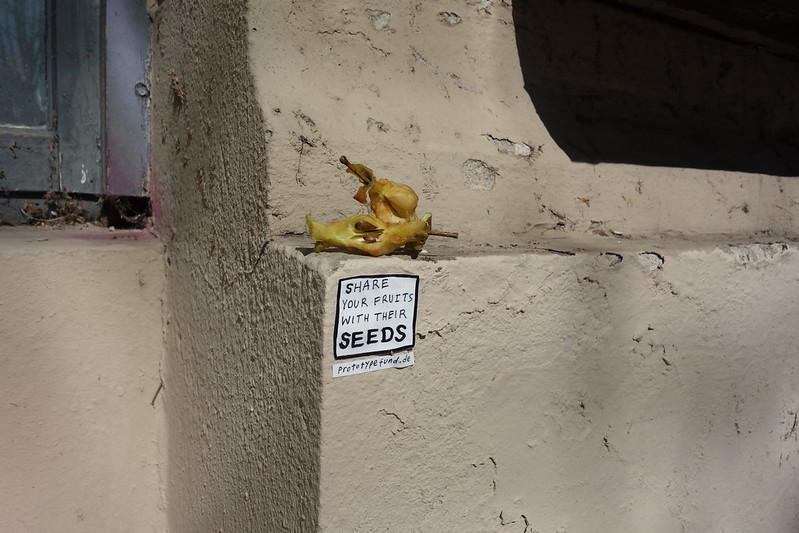 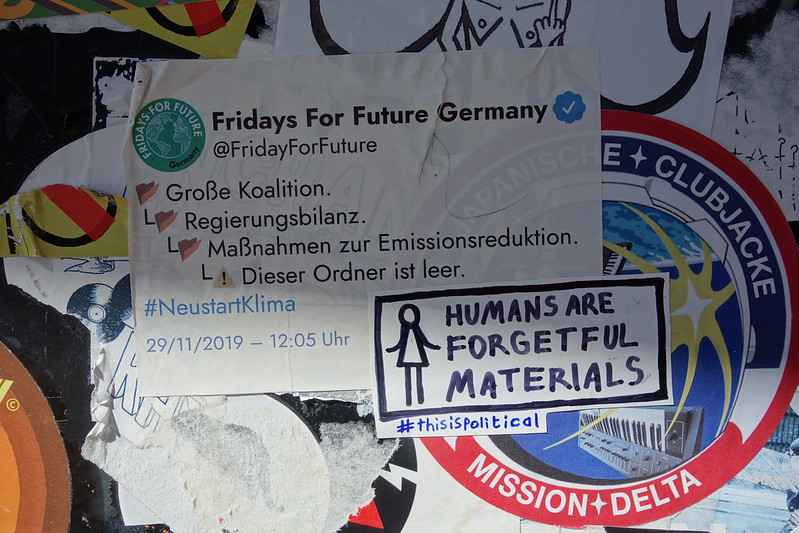 the materials start to degrade fast. even within the hour from making to placing, the apple flesh became soft and the spaghetti got soft from moisture… things basically start to fall apart rather fast…

part of the impact is the visual sculptre, so if it falls to parts, it just looks like compost again.

even though these are “natural materials”, they are not natural to the street. they will still be seen / felt / treated as trash and somebody will *need* to clean them up…

in this sense they are just like other graffiti / sticker art… adding more material to the urban landscape.

from going through a quick process of making and placing these fertile messages, i got a sense that they could be greatly improved:

>>>quality and creativity<<< of the assembly/sculpture. the more strange/amazing they look, the more people will pay attention to them and consider the human effort and care that went into making them.

>>>the correlation<<< between the written message and the choice of materials and assembly.

>>>the placement<<< and integration of the message into the urban landscape. is it:
– placed somewhere to look like it always belonged there.
– placed in a natural location where the “it could compost right here” notion still works to a greater extent.
– placed in an un-natural location so that it stands out.

in a next test i would like to focus in on a message-assembly combination that together become something more (than the sum of it’s parts:-), and also consider it’s placement carefully – both spatially/infrastructurally (is on the ground, by window, lamppost…) and geographically in the city (outside shopping areas, in parks, certain neighborhoods…) – what connections are there between the message and the audience it would reach in different locations… 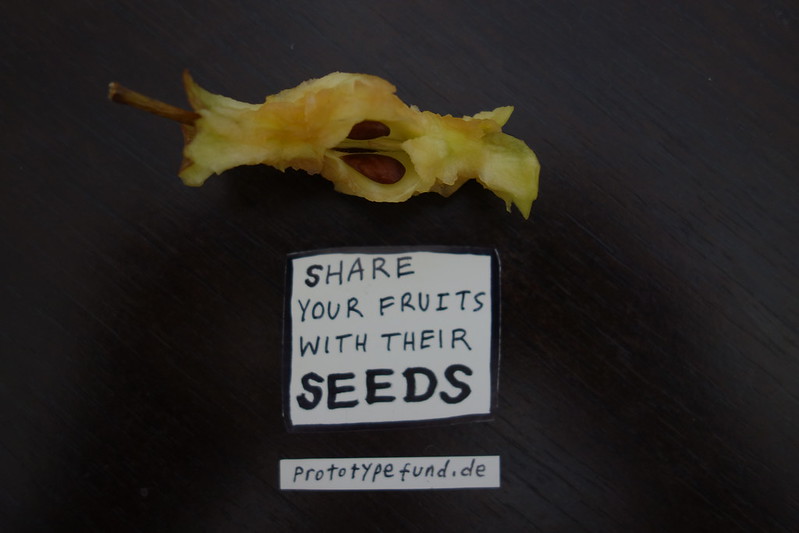 i really enjoy how this work makes a connection from my kitchen to the streets i travel through every day. i start to look at the street as a place of creative expression.